UPDATE: West Valley City has also confirmed the flag will be on the Fairbourne Station Plaza, at 3590 Market St., at 12:30, to honor the loss of West Valley City Police Officer Cody Brotherson.

SOUTH SALT LAKE, Utah, Sept. 15, 2019 (Gephardt Daily) — The Honor Flag will make a stop Monday at the South Salt Lake Police Department to recognize the sacrifice of Officer David Romrell, who was killed in the line of duty on Nov. 24, 2018.

The Honor Flag, a traveling tribute, will arrive at approximately 11:45 a.m. at the South Salt Lake Police Department, 2835 S. Main St., for a short ceremony, open to the public.

Romrell, 31, died Nov. 24 of last year after being run over by two burglary suspects outside a business near 3575 South and West Temple Street.

Romrell, a Marine veteran, had joined the SSLPD 10 months earlier. He left behind a wife and 4-month-old child.

The Honor Flag website says the flag will also make stops at multiple other Utah Police Departments on Monday, but offers no details other than tentative arrival times. 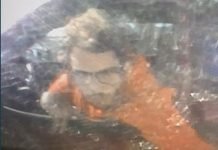 Update: Police seek to locate individual who may be traveling with missing South Salt Lake man