PAGE, Ariz., April 24, 2018 (Gephardt Daily) — A body found at the bottom of the Horseshoe Bend in Glen Canyon National Recreation Area is thought to be that of a missing man from Buckeye, Arizona, officials said.

A news release from the National Park Service said Coconino County Sheriff’s Office out of the Page, Arizona, substation responded to the Horseshoe Bend parking lot Sunday just before 2:15 p.m.

The Sheriff’s Office had been notified by Page Police Department that the vehicle of the missing person out of Buckeye had been located by family members.

Coconino County Sheriff’s deputies made their way to the body from the top of the rim in an Arizona Department of Public Safety helicopter.

The body was then transported to Flagstaff by the Medical Examiner to be positively identified.

The case is still under investigation pending a positive identification of the body by the Coconino County Medical Examiner’s Office.

Horseshoe Bend is approximately 70 miles east of Kanab, just over the Arizona border. 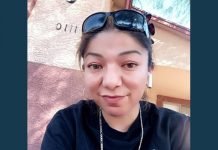