WEST VALLEY CITY, Utah – Law officers arrested a Hunter Junior High student on Tuesday after reports that he had made threats against students at his school.

According to a Facebook post from the Granite School District, school officials were alerted to threats against several students at Hunter Junior High School, according to the post.

Students told officials the student had left and said he intended to return later and do something harmful, according to reports.

“Because of the nature of the threat, we have taken appropriate precautions to secure our campus until the threat can be substantiated and resolved by law enforcement,” the post said.

A district comment on the post, added a short while later, stated that the student in question was in custody, the shelter-in-place protocol had been lifted, and school was “proceeding as normal” with classes continuing.

Police were conducting interviews to see whether the threat could be substantiated. The name of the student in question and the exact nature of the threat have not been released. 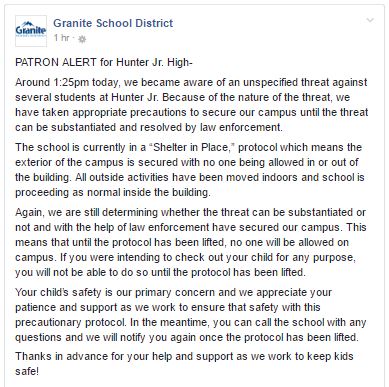