KANARRAVILLE, Utah, Feb. 10, 2020 (Gephardt Daily) — Troopers were at the scene of a Monday night crash on northbound Interstate 15 near milepost 48 in southern Utah.

Northbound I-15 was closed for about an hour and was reopened at about 8:20 p.m.

The semi driver was not injured.

Two people in the car sustained injuries, with one in serious, but stable, condition. The other is in critical condition, Street said.

A medical helicopter had difficulty landing because of high winds in the area, but the chopper did manage to land, and crews were working to get the critically injured person out of the car and into the helicopter.

No further details are currently available. 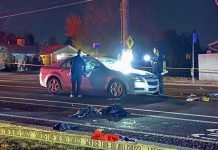