HOLLADAY, Utah, Sept. 25, 2018 (Gephardt Daily) — Remember Monday’s story about a man at Old Mill Golf Course who ran his cart into a tree, partially impaling himself?

Well, some detective work by the Unified Police Department has cleared the golf cart and the tree of any involvement in the incident.

The injured man had come up with the unlikely cover story “Because he was embarrassed,” Detective Chuck Malm, UPD, told Gephardt Daily on Tuesday.

The injured 57-year-old golfer is in fair condition and improving, fortunately, but what led to his puncture injury was his own ill-advised reaction to a swing.

“I guess he made a shot he was not happy with, and he was angry, and somehow managed to hurt himself with his club,” Malm said Tuesday.

“When he went to get help, he was embarrassed to tell people what really happened, so he told them the story with the tree and the golf cart.”

The golfer revealed the truth when on-scene evidence failed to support his original claims, Malm said. 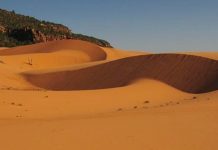