Mother Ziva, 9, gave birth to the female foal on April 14, the Zoo announced on Wednesday.

“Ziva is an experienced mother which means she does what comes naturally without much staff help,” said Michelle Olandese, Animal Care Supervisor.

Bryce was successfully standing, nursing, and investigating her surroundings while staying close to mom shortly after birth, the Zoo statement says.

Gestation period for Hartmann’s zebra is about 12 months, with one foal born at a time. Dr. Erika Crook, Director of Animal Health, said Bryce had a “well baby” exam at four days, “and found her to be very strong and healthy like all of Ziva’s previous foals.”

Born January 18, 2013 at the Louisville Zoo, Ziva came to Utah’s Hogle Zoo on a breeding recommendation through the Species Survival Program (SSP) in 2014. She was then introduced to father, Scooby, 7, who was born at Disney’s Animal Kingdom.

SSP looks at the genetic history of animals to find the best matches. A managed breeding program is especially important for animals like the Hartmann’s zebra which are a vulnerable population in the wild.

As temperatures start to warm, Bryce and Ziva can be seen at the African Savanna exhibit, along with the rest of the herd the Zoo statement says. 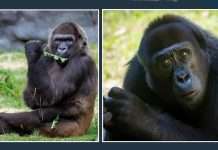 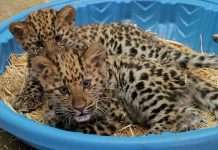