Chaffetz made the request in a joint letter he and fellow Republican Rep. Bob Goodlatte, chairman of the House Judiciary Committee, sent to the U.S. Inspector General’s office Wednesday.

“Over the last several days, there have been a series of news articles recounting potentially classified national security information,” the letter states. “These include reports on communications of or regarding the President’s former National Security Adviser Lieutenant General Michael Flynn ….

“We have serious concerns about the potential inadequate protection of classified information here ….

“In light of this, we request that your office begin an immediate investigation into whether classified information was mishandled.”

Donald Trump himself attacked the leaks in a series of early morning messages posted on Twitter, referring to them as the “real scandal.”

.
Late last week, Chaffetz took aim at Trump adviser Kellyanne Conway after she promoted Ivanka Trump’s clothing line in an interview with Fox TV. The Utah Republican sent a letter to the Office of Government Ethics asking Conway be investigated for the endorsement, a potential violation of federal law.

Tuesday Chaffetz sent a letter to White House Chief of Staff Reince Priebus asking about security measures taken in the wake of North Korea’s ballistic missile test, when it appeared documents and information were being reviewed in public while Trump dined with Japan’s Prime Minister Shinzo Abe during a gathering at Mar-a-Lago.

Chaffetz has shown considerably less interest in investigating the role the Russian government allegedly played in attempts to influence the 2016 U.S. election. 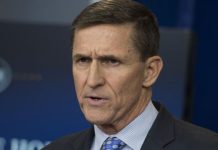