TAYLORSVILLE, Utah, Oct. 6, 2020 (Gephardt Daily) — Two people are in the hospital Tuesday night, one in critical condition with gunshot wounds, and one with injuries sustained in a vehicle crash that led up to the altercation in which shots were fired.

Sgt. Melody Cutler, with the Unified Police Department, said the incident began earlier in the evening at the intersection of 5400 South and 1900 West.

A group of motorcyclists were out for their regular Tuesday ride when a Jeep made a turn from the center lane into the Texas Roadhouse parking lot and struck one of the motorcyclists, Cutler said.

The other motorcyclists followed the Jeep into the parking lot and asked the driver to get out of the vehicle, Cutler said.

Instead of stopping and getting out, the driver began to back up the Jeep, hitting a motorcycle as he did so.

An altercation ensued and “someone pulled out a gun,” Cutler said.

An uninvolved citizen in the parking lot saw the altercation and “had no idea there had been an accident, and only saw someone pull a gun,” Cutler said. So the citizen got out with his gun in order to intervene.

Several shots were fired, Cutler said, and the Jeep fled the scene.

Police located the Jeep and the wounded passenger at a car wash at 4900 South and Redwood Road, after the driver called police to say he had dropped off his friend there.

“We know one individual in the Jeep was hit (by gunfire). A man in his early 20s, who is currently in critical condition at IMC,” she said.

The driver then fled and has not yet been identified. Cutler said the Jeep was stolen out of Weber County and police recovered it at the car wash.

The motorcyclist who was on his bike when he was struck by the Jeep is in the hospital in fair to serious condition.

Cutler said the two shooters are in custody and both are cooperating with the investigation. She said officials are working to find out exactly what happened and what charges, if any, will be filed. 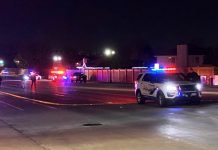