The ceremony which took place on a grassy field in the city of Coeur d’Alene near Hough’s family home, was attended by over 200 guests including Hough’s brother Derek Hough who served as a groomsman, their two dogs Lexi and Harley, Nina Dobrev, Aaron Paul and Mark Ballas, reported People magazine.

“I don’t think I ever really necessarily dreamed about my wedding as a kid,” the Orem-born Hough said of the wedding. “But I know I will always cherish and remember it for the rest of my life.”

Before tying the knot, the couple took photos together on a balcony that overlooks a lake. “When it was time for the ceremony, Julianne and Brooks took a boat ride to the ceremony in a beautiful wooden boat,” a source detailed to E! News.

“Brooks was driving and it was just the two of them cruising around. Julianne was laughing as her veil flew in her face and she tried to keep it on. She sat on the back of the boat and put her arm around Brooks. It was very romantic and a unique way to make their grand entrance,” they continued.

After the ceremony wrapped, a reception was held with dinner and dancing. Hough, 29, and Laich, 34, became engaged in 2015 after nearly two years of dating. 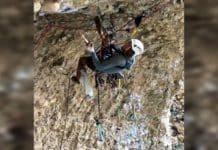 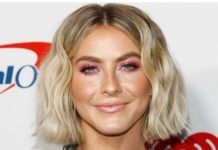