KANE COUNTY, Utah, April 21, 2020 (Gephardt Daily) — Kane County officials responded to a report of a body in a vehicle Monday.

A news release from Kane County Sheriff’s Office said: “At approximately 10 a.m., Kane County dispatch received a call about a vehicle parked at the Dry Fork trailhead with a dead body inside. Dry Fork is a popular hiking area off the Kane County portion of Hole in the Rock Road.”

“Evidence at the scene revealed that a 31-year-old male from Kentucky had taken his own life,” the news release said. “The individual had been working in eastern Utah.”

The deceased man’s family has been notified and his body was transported to the Utah Medical Examiner’s Office for further investigation. The deceased man has not been identified.

Gephardt Daily does not generally report on suicides unless they occur in a public place or otherwise impact a community. 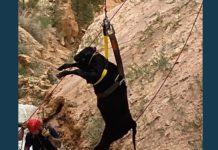 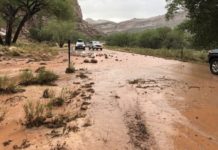