Koraima Herrera, 22, has been booked into Salt Lake County Jail, according to Unified Police Department.

Lt. Paul Barker, of the Unified Police Department, told Gephardt Daily that police were dispatched to a home at 4025 W. 5900 South at about 9:30 p.m. after two calls were received reporting an injured man.

Upon arrival, officers learned that the 38- or 39-year-old man had been stabbed in the chest after “he and his live-in girlfriend got into some sort of argument and a knife got involved,” Barker said.

The man was transported to Intermountain Medical Center by fire department personnel, and the woman was taken into custody by police.

Barker said other adults were in the home at the time of the incident, and the victim went to a neighbor’s home, which resulted in the two separate calls to police.

The boyfriend, who has not yet been identified, remains in critical condition Sunday. 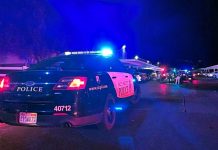