GARFIELD COUNTY, Utah, Jan. 13, 2021 (Gephardt Daily) — Three people have been arrested after more than one pound of methamphetamine, along with a “substantial amount” of heroin and cocaine were recovered from a Garfield County home.

On Dec. 28, Roxanne Abner-Simpkins was arrested at her home by officers from the Iron, Garfield, Beaver County Task force along with Garfield County deputies and one member from the Piute County Sheriff’s Office, said a news release.

“A 3-year-old child, who is the great-grandchild of Roxanne Abner-Simpkins and living in the home, was taken by the Division of Child and Family Services for her protection,” the news release said. “A hair follicle test was done on the child and showed positive for opioids and methamphetamine.”

Abner-Simpkins is expected to be prosecuted federally due to the large amount of drugs and weapons located in the home.

“Garfield County Sheriff would like to thank all those involved in this multi-month investigation and of the successful outcome,” the news release said. 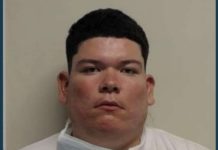