HILL AIR FORCE BASE, Utah, Oct. 18, 2020 (Gephardt Daily) — Communities surrounding Hill Air Force Base will hear increased activity during the overnight hours next week as a number of aircraft will depart after midnight and return in the pre-dawn hours of Tuesday, Oct. 20 and Friday Oct. 23.

“The departure and return times are necessary for the aircraft to make round-trip flights in support of an off-station military exercise,’ said a news release from Hill Air Force Base. “Night operations are limited to what is required for pilots to maintain their combat readiness and support essential missions.”

The 421st Fighter Squadron, one of three squadrons in the wing, is currently deployed to the Middle East. The other two squadrons continue to fly and train at Hill, and remain ready to deploy when needed.

Hill AFB is home to 78 F-35A Lightning IIs. The 388th and Reserve 419th are the Air Force’s first combat-capable F-35A units, and fly and maintain the jet in a Total Force partnership, which capitalizes on the strength of both components, the news release said. 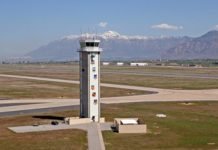