LAYTON, Utah, Aug. 4, 2022 (Gephardt Daily) — The Layton Police Department has issued a scam alert after three arrests were made of alleged scammers who tried to sell fake gold jewelry the Layton Police Chief.

“A group of people have recently been in our area approaching people in parking lots and offering to sell them gold,” reads a post on the department’s Facebook page under the headline “Scam Alert.”

“The victims have found later that the gold they purchased was fake. We arrested two men and a woman in the Walmart parking lot recently after they approached our chief and offered to sell him gold!

“We believe there may be more victims and are asking anyone else in the area who may have fallen victim to this scam in the past few months to contact us.” The ironic encounter with Chief Allen Swanson came Saturday

The suspects had eastern European accents, were driving a newer model rented SUV, and often had young children in the vehicle and claimed they needed the money to care for the children, according to the Monday post. 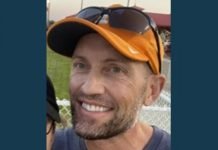