● One letter asks LDS Church members and leaders in Arizona, California and Nevada to vote against legalizing recreational marijuana use in those states.

● The other letter asks church members and leaders in Colorado to vote against assisted suicide, which would require a physician-prescribed medication, and would be available to terminally ill patients with less than six months to live.

The letters, which were confirmed authentic by LDS Church spokesman Eric Hawkins, were both dated Oct. 12 and sent from the Office of the First Presidency.

Both letters are generating considerable support and opposition on social media.

The full text of each letter follows:

Lawmakers and voters in several states, including Arizona, California, and Nevada, are considering legalizing the use of marijuana for recreational purposes.

Drug abuse in the United States is at epidemic proportions, and the dangers of marijuana to public health and safety are well documented. Recent studies have shed light particularly on the risks that marijuana use poses to brain development in youth. The accessibility of recreational marijuana in the home is also a danger to children.

we urge Church members to let their voices be heard in opposition to the legalization of recreational marijuana.

Lawmakers and voters in some states, including Colorado, are seeking to legalize physician-assisted suicide. The Church maintains a firm belief in the sanctity of human life and opposes deliberately taking the life of a peson even when the person may be suffering from an incurable condition or disease (see Handbook 2: Administering the Church (2010), 21.3.3). Life is a sacred gift and should be cherished even in difficult circumstances.

Physician-assisted suicide is permitted by law in some countries and a few states in the United States. Experience suggests that such legalization can endanger the vulnerable, erode trust in the medical profession, and cheapens human life and dignity. Moreover, the decision to end one’s life carries a lasting impact far beyond the person whose life is ending.

While the Church opposes physician-assisted suicide, members should not feel obligated to extend mortal life through means that are unreasonable. Decisions in such cases are best made by family members after receiving wise and competent medical advice and seeking divine guidance though fasting and prayer (see Handbook 2: Administering the Church (2010 21.3.8).

We urge Church members to let their voices be heard in opposition to measures that would legalize physician-assisted suicide.

Reactions on social media were mixed, and included the following posts on the Facebook page of KSL television, which is owned by the Church of Jesus Christ of Latter-day Saints. Below are seven consecutive comments:

• “If you are aren’t an active member of the church, don’t worry about it. If you are an active member, it all goes back to these men being true Prophet’s and inspired by God. (Which they are). Part of following and sustaining them is trusting in their counsel even if you may not understand it all.”

• “The church is simply giving direction to its congregation. That is all. They are not forcing anyone to do anything. Killing yourself is suicide, even if you are terminal. Therefore the church is against it. Why are people shocked over it? Are people going to bash the church because they are against abortion and gay marriage? Probably….but they follow the word of God…”

• “Well,…since the prophet and his counselors said it then it must be from God… please. This is so wrong on many levels. Now, in order to be considered a “good latter day saint” masses of people will feel obligated to go in opposition to what is actually right and vote in favor of a couple of old men’s political views. A lot of power there. I am appalled that they would even go there.”

• “I’m LDS and I strongly disagree with our leaders advising members about politics. If a member of the media asks the church its stance on a certain issue, sure, release a statement. But advising members on how to vote? No. I firmly believe in the division of church and State. And sadly, many people will vote a certain way simply because “the Prophet said to” rather than studying the issues and forming their own opinions.”

• “The church needs to keep their elders or whatever out if politics for everyone’s sake they are the worst ppl out of all the churches always trying to literally push their beliefs on everyone they come in contact with!” 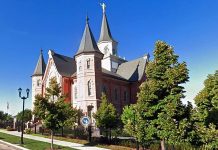