SALT LAKE CITY, Utah, Sept. 23, 2021 (Gephardt Daily) — The Church of Jesus Christ of Latter-day Saints has shared a two-year-update on the Salt Lake City Temple project, intended to earthquake-proof the structures and upgrade the facilities.

The project started in September of 2019, so this year marks the two-year mark renovation, projected as lasting four years.

The Church’s photos and updates appear below.

Over the past month, the Salt Lake Temple has begun “jack and bore,” a major seismic strengthening process in which steel pipes, 3.5 to 4 feet in diameter, are inserted below its existing foundations. The soil is removed from inside the pipe as it is gradually inserted horizontally. Each pipe under the temple towers is 40 feet long, made from two 20-foot-long segments welded together. The soil inside the pipes will initially be removed by hand to ensure the pipes are precisely installed.

The gap between the outside surface of the pipe and the surrounding soil is then filled with grout. After the pipes are installed, they will be filled with reinforced steel, including post-tensioning strands, and high-strength concrete. The entire existing foundation of the temple will be supported by 92 such pipes. 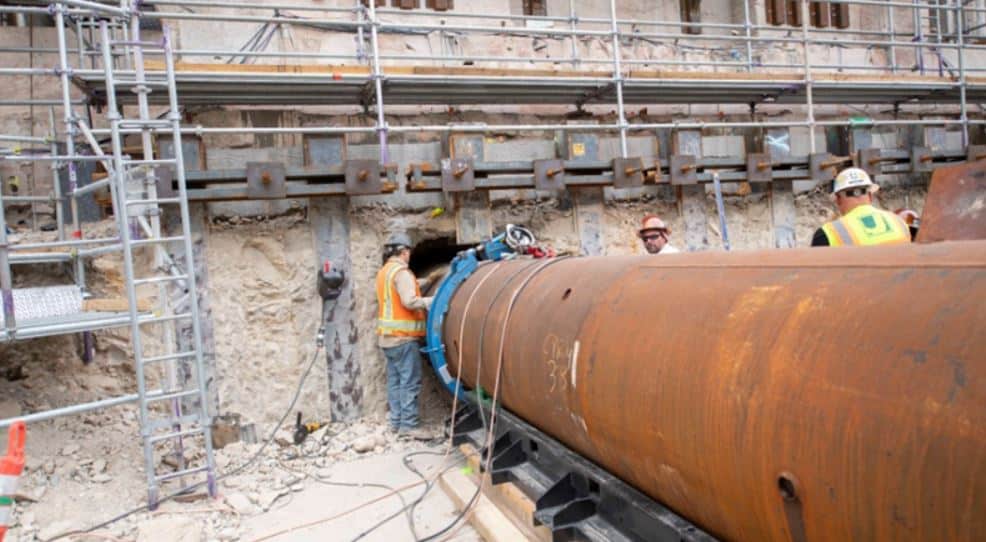 On the north side of the temple, the excavation has continued past the level of the entrance tunnel. This excavation will provide space for three new underground floors, which will be used as an addition to the temple. The tunnel will connect the Salt Lake Temple to the underground parking garage in the Conference Center to provide safer and easier access to those visiting the sacred edifice.

Two new trusses were installed on the roof of the temple. Three of the eight areas (or bays) have already been completed as part of the truss installation. The roof is closed each time new trusses are installed to protect the interior finishes of the historic building.

The secant wall that acts as a retaining wall around the temple continues to be excavated to prepare for the three future floors underground and to contain the soil under the temple.