Lehi Fire Department Battalion Chief Jake Beck said no one was in the building, at 181 N. 1200 East, and crews were able to keep the fire confined to the basement.

The alarm came in at 10:14 p.m., Beck said, and it took crews about an hour from the time of arrival to get the blaze extinguished. They were still on scene past midnight,  ventilating the building and cleaning up.

Smoke damage was extensive, but the fire itself never reached the main floor of the building, Beck told Gephardt Daily.

A firefighter was cut on his back by a broken window as he made entry into the building, but Beck said it was a minor injury that required a couple of stitches. No other injuries were reported.

The cause of the fire is still under investigation, and no estimate of damage was available late Sunday night. Crews were expecting to be on scene for a while, clearing out the smoke.

Paraglider taken to hospital after crash in Lehi 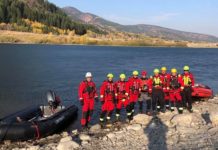