LEHI, Utah, Dec. 4, 2019 (Gephardt Daily) — A 51-year-old Lehi man, who is on the Utah Sex Offender Registry for convictions in 2016, was arrested after he went inside an elementary school in American Fork four times in four days in October.

“Bryant pleaded guilty in 2016 to three counts of attempted aggravated sexual abuse of a child, all first-degree felonies. Those incidents were from 1998 while Bryant was in a position of special trust in relation to the victims.”

Bryant was originally arrested in that case in 2015 on three counts of attempted aggravated sexual abuse of a child, first-degree felonies, four counts of tampering with a witness, third-degree felonies, and 10 counts of sexual battery, class A misdemeanors.

“During these incidents Bryant told some victims he worked for the FBI, that he would make their friends disappear, or he would kill them if they told anyone what he did,” the news release said

Because of these convictions Bryant has a lifetime requirement to be on the Utah Sex Offender Registry. Part of the restrictions in Utah State Code, 77-27-21.7, state that one of the protected areas includes “a public or private primary or secondary school that is not on the grounds of a correctional facility.”

On the original charges, Bryant spent two years in jail before he pleaded guilty as part of his sentence. He successfully completed probation on July 11, 2019, but his requirement to be on the Utah Sex Offender Registry remains in place, officials said.

“Also during at least one of the visits, Bryant was seen wearing a Halloween costume in a picture with the staff member he was there to visit.  Additionally, on one of the visits Bryant brought treats for the children in one classroom.”

Bryant is required to sign an agreement on a regular basis stating he understands the requirements and restrictions by which he must abide. He last updated this agreement with his signature on July 23, 2019.

Bryant was booked into jail in this new case on four counts of violating his conditions and restrictions on the Utah Sex Offender Registry by being in or near a protected area. These charges are class A misdemeanors.

Bryant posted bail and was released from jail a short time after he was booked. 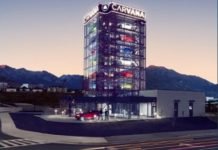