The North Blue Fire is burning about 20 miles east of Vernal and is 80% contained, according to Utah Fire Info. No structures are threatened.

“Firefighters on the ground were aided by aircraft dropping water and retardant,” Utah Fire Info tweeted. 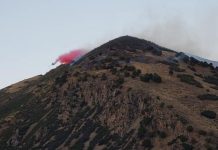