July 4, 2016 (Gephardt Daily) — Every nine seconds, a woman in the United States falls victim to a form of domestic violence, whether it involves a spouse, significant or other member of the extended family.

That averages out to about 10 million victims of domestic violence per year, nationwide.

One of those victims was Tawnee Baird, the 21-year-old daughter of popular Utah radio personality Casey Baird, heard on KBER 101.1.

Tawnee died in October 2014 after being stabbed by her partner in a fit of jealous rage. Casey Baird, his family, friends and fans, were devastated by the loss.

There had been signs of physical abuse — signs Baird and other family members wish they had followed up on.

“It’s still a little hard for me to talk about, but I know it needs to be,” Baird told Gephardt Daily.

“Ninety-nine percent of her domestic abuse, I did not know about. I still carry so much guilt, things I wish I had known and things that I wish I could have done. I believe she would still be here today had I truly understood all that what was going on.

“I believe it is important for people to call the cops and report when they or their loved one is being abused. They can help victims and the families understand ways to handle domestic violence. Hiding the abuse and lying about what happened is what ultimately cost my daughter her life, something no one ever thought could happen.”

It’s a message Baird now emphasizes whenever he talks about his daughter — a message he hopes to drive home as he joins efforts with Break The Silence Against Domestic Violence, a San Diego-based victims’ advocacy group — and their magnanimous fundraising effort, the 2016 Angel Run.

Team Tawnee is one of 25 teams across the U.S. taking part in the Angel Run.

Each team represents a specific victim of domestic violence, with runners agreeing to run a mile a day for 22 days in July.

Money raised through the awareness campaign goes directly to the advocacy group’s Grants of Hope program, providing funds to cash-strapped victims of domestic violence who might otherwise stay in an abusive relationship because they simply can’t afford to make it on their own.

The Grants of Hope program is designed to be a lifeline, helping survivors with financial needs such as groceries, utilities, car payments, rent, as they rebuild their lives after often years of abuse.

To donate directly to the Grants of Hope program, please visit Breakthesilencedv.org , text runbts57 to 71777 or go straight to the Team Tawnee donation page. 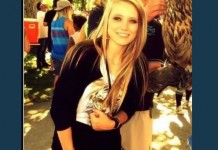