Dillan Taylor Derrick, 20, was arrested on May 7 of this year, and this week accepted a plea deal in the case.

The victim told officers of the Logan Police Department that Derrick had come to her residence, and she opened the door, believing it was someone else. Derrick then put his foot in the door so she was unable to close it, she said.

“The victim said Dillan had come over to discuss their relationship that in her mind was over,” the probable cause statement says.

The woman said she demanded Derrick leave the apartment, and pushed on his back to try to get him to leave. When Derrick became more upset, the victim told police she locked herself in her bedroom.

The woman said she and Derrick continued to argue, and she went to her bedroom. Derrick joined her, she said, adding that he pushed her when she tried to get up, then put his hands around her neck with his fingers separated, the statement says.

“The victim reported she did not lose consciousness, but did have difficulty breathing after the incident with a shallow, fast-paced, and ‘choppy’ breathing. The victim said Dillan had calmed down and she went to the bathroom.”

The statement said officers observed bruising, redness and a scratch on the victim.

The probable cause statement notes that Derrick had assaulted the victim on two previous dates.

Post Miranda, Derrick admitted to tricking the victim into thinking he had left the apartment, the statement says. Derrick said that in the bedroom, the victim began hitting him. He admitted holding the woman down, but “reported he did not have his hands on her neck or face.”

Derrick is being held without bail in the Cache County jail. His sentencing is set for July 27. 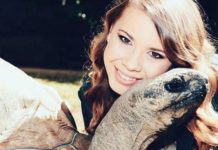