Omar Carrillo-Delacruz was booked into Cache County Jail Wednesday on suspicion of:

A probable cause statement filed by an officer of the Cache County Sheriff’s Office says the arrests came after a lengthy investigation “in a criminal conspiracy of at least three individuals producing counterfeit U.S. currency.”

One of them “indicates that he has been producing counterfeit currency for quite some time using photocopier/printers, cotton paper and colored ink,” it says. She “stated that Omar had asked her to buy ink for the printers. Three photos of matching printer cartridges were found on (her) phone. When arrested, (she) had counterfeit currency in her possession on at least three occasions.”

A search of a Lewiston residence where Carrillo-Delacruz lived briefly, examined under warrant, found four printers, cotton paper, a paper cutter, counterfeit pens, and more than $100 in counterfeit currency, the statement says. The fake money was found in green bags and totes.

A search of Carrillo-Delacruz’s Logan residence turned up identical green bags and totes, the statement says.

The female suspect mentioned above “alleges that after the first search warrant, Omar placed the items in the home believing it would not be searched again,” the probable cause statement says.

Phone messages linking Carrillo-Delacruz and the female suspect, who is reportedly facing the same charges, was found during forensic extraction.

“Omar assured me that he found it at the carwash three days ago and only kept it out of curiosity,” the deputy’s probable cause statement says.

An ID belonging to a deceased person was found in Carrillo-Delacruz’s possession. Credit cards and a checkbook found in the suspect’s possession also belonged to others, the statement said.

The names of the female suspect and a third suspect of non-specified gender were not listed in Carrillo-Delacruz’s probable cause statement.

“Omar told me he has not been working for about two years,” the statement says. “It is believed he has been using counterfeit currency to supplement his income.”

Carrillo-Delacruz is being held without bail. 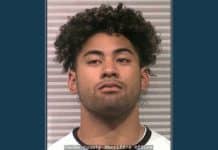