The quake, which took place in Littleton, an unincorporated town in the Arizona Strip, struck at 3:18 p.m. at a depth of about six miles below the surface, according the U.S. Geological Survey.

Residents from Mesquite to St. George to Santa Clara reported feeling the quake, although there were no reports of significant damage or injuries.

“WOW! Just felt the earth tremor, here, in St George! Enough to shake us up from the couch to look around and wow it! Lasted a couple seconds maybe,” wrote Facebook user Dick Nourse.

“I felt it.. it felt like 2 big shakes, stuff in my cupboards moved,” wrote another resident, by way of Twitter.

“We felt it in Santa Clara, the tiles on our roof shifted with the house frame. We thought someone was up on the roof. Might have been an aftershock though!” tweeted another.

Monday’s seismic activity comes in the aftermath of much larger quakes making headlines in recent days, including a magnitude 7.6 earthquake that struck Mexico’s Pacific coast Monday morning. Only one death has been reported by local authorities who are citing limited “material damage.” 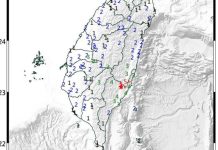