SPANISH FORK CANYON, Utah, Oct. 5, 2021 (Gephardt Daily) — A man was Life Flighted to an area hospital Tuesday after the side-by-side he was trying to drive onto a trailer fell down an incline and tumbled about 150 yards down a mountainside.

“He also had some head injuries and bleeding, but nothing that appeared life threatening,” Cannon said. “He was in a lot of pain, but he was doing well, alert and talking to us. His leg is going to sore.”

The accident happened at about 7 a.m. Tuesday 10 miles up Sheep Creek Road in Spanish Fork Canyon. 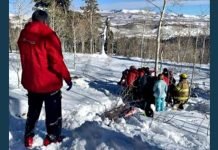