LEHI, Utah, June 3, 2021 (Gephardt Daily) — A man has been arrested after he allegedly attempted to assault a 5-year-old at a Lehi recreation center.

A probable cause statement from Utah County said Jonathan Jareth Soberanis, 26, is facing charges of:

On June 1, officers with the Lehi City Police Department took a report of a 5-year-old child allegedly being sexually assaulted by an unknown man while he was unaccompanied in the locker room at a local recreation center, the statement said.

The child was interviewed a day later and said that the man came into the bathroom stall while the child was using the bathroom, allegedly exposed himself, and touched the boy inappropriately.

The child’s mother then summoned staff at the recreation center, who contacted police.

Detectives with the special victims unit at Lehi City Police Department began investigating the case and located surveillance footage of a man entering the locker room during the same time frame that the child was in there, according to the statement. The man was wearing clothing that matched the description the child gave. He was also seen on surveillance footage running out of the locker room, the statement said.

Based on the surveillance video, the man was identified as Soberanis, police said. The suspect has been arrested before for lewdness, sexual abuse of a child, and lewdness involving a child, the statement said. He had also been banned from the same recreation center for allegedly performing sexual acts in the locker room showers in 2015.

Lehi officers went to the suspect’s residence Wednesday to interview him. After being read his Miranda rights, Soberanis stated he had been at the rec center at the time the incident occurred and stated he was there “working out,” the statement said.

“However, upon reviewing the footage during the time, Jonathan was never seen accessing any workout equipment,” the statement said. “When Jonathan was confronted with the fact he wasn’t seen exercising and he was seen running from the locker room at the time the incident occurred, Jonathan claimed he couldn’t remember. Jonathan stated he couldn’t remember what he did in the locker room and claimed he has a disability that prevents him from recollecting his actions.”

When detectives attempted to take Soberanis into custody, he allegedly began to resist. “Jonathan put his arms into his chest and bent at his waist, to prevent officers from getting his arms free and placing handcuffs on him,” the statement said. “Furthermore, Jonathan began to kick and throw himself around, causing officers to sustain minor injuries; cuts and bruises. During the scuffle, Jonathan also picked up an end table with a large glass top, and propelled it at officers.”

Officers were eventually able to get Soberanis “pinned down and under control,” the statement said. He was  transported to the Utah County Jail, where he is being held without bail. 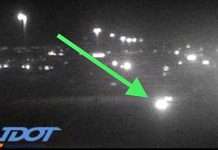 UHP: Another wrong-way driver reported on I-15, in Utah County