A probable cause statement from the 3rd District Court of Salt Lake County said Chakradhar Thuta, 28, is facing a charge of forcible sodomy, a first-degree felony, and two counts of forcible sexual abuse, a second-degree felony.

The statement said that on Oct. 11, 2020, the 16-year-old girl was at work with her manager, Thuta, when he mentioned she had pet hair on her clothing.

“Thuta pulled her into the office and began brushing dog hair off her back,” the statement said. “She stated Thuta went further down, touching and hitting her butt with his hand. She stated that Thuta told her to sit down, so he could show her some things on the computer.”

The victim told officials that while sitting at the computer, Thuta began to touch and rub her thigh. He then allegedly asked her: “Are you OK with this?” the statement said. He also kept telling the victim she was pretty.

“She then stated that Thuta asked her to go into the back office that did not have cameras,” the statement said. “Thuta wrote a note and left it on the front door, that they were closed and would be back in a minute.”

He then sexually assaulted the girl, police say. She told officials “she did not want to make her boss upset so she complied,” the statement said.

The suspect will have his first court appearance March 10. 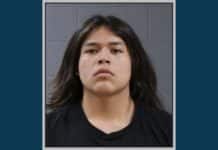