SALT LAKE CITY, Utah, April 10, 2020 (Gephardt Daily) — A suspect is facing multiple charges after an alleged aggravated assault in Fairmont Park culminated in a serious crash as he fled from a traffic stop Friday evening.

Salt Lake City Police responded at about 5:47 p.m. to a report of an ongoing altercation in Fairmont Park.

A man had brandished a knife at another man and a woman, but didn’t stab or injure either one, SLCPD St. Andrew Cluff told Gephardt Daily.

When officers located the suspect vehicle, Cluff said, the suspect took off and “almost ran over another victim as he fled from officers,” then crashed into two other vehicles.

Sgt. Melody Gray, with the Unified Police Department, said at the scene that officers located the suspect vehicle in the area of 2100 South and Highland Drive. When they attempted a traffic stop, “the vehicle fled at a high rate of speed on southbound 900 East.”

The suspect, Cory Trevort, 39, is facing several charges, including aggravated assault and fleeing. Gray said he also is wanted on a robbery warrant.

Gephardt Daily will have more on this developing story as more information is made available. 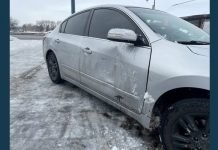 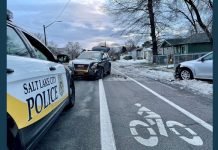