CEDAR CITY, Utah, Jan. 26, 2021 (Gephardt Daily) — A man has been arrested after a high-speed pursuit in Cedar City Tuesday afternoon.

“At approximately 1:42 p.m., Cedar communications received a report of a suspicious male attempting to pawn possible stolen property at a local pawn shop,” said a news release from Cedar City Police Department. “The suspect left and it was determined he was driving a vehicle with a stolen license plate. The suspect was located at another local pawn shop where an officer encountered him. The suspect refused commands and fled in a vehicle at a high rate of speed.”

Officials attempted to stop the vehicle, but the vehicle failed to respond to lights and siren, the news release said. The suspect continued northbound on Main Street, still at a high rate of speed, for several blocks before making a sharp turn at Stoney Pine Drive and North Main. The suspect exited the vehicle and took off running with officers in pursuit. After a short foot chase, the suspect was safely taken into custody.

There were no injuries reported but as a precaution, the suspect was taken to Cedar City Hospital for a medical clearance before he was booked in the Iron County Jail.

The suspect was identified as Steffan Nunley, 28, who was charged with two counts of possession of a stolen vehicle, felony fleeing, failing to stop at the command of a police officer, and traffic violations. 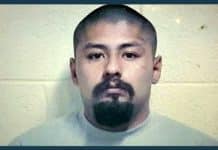 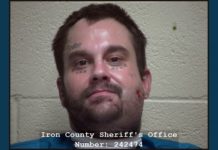