The incident took place in the area of 100 S. Main St. just after 3:45 p.m., the Salt Lake City Police Department said in a news release.

“A 36-year-old male was standing in the roadway outside the crosswalk at this address,” the news release said. “A white Lexus SUV travelling westbound on 100 South struck the male and fled the scene.”

The victim was transported to a local hospital with serious injuries that are not believed to be life-threatening.

Officers on scene developed suspect information and the suspect was located a short time later, the news release said. Todd Rex Smith, 49, was booked in to jail for felony hit-and-run, felony DUI and open container. 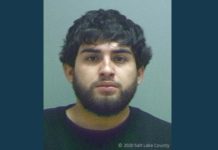