SOUTH OGDEN, Utah, Oct. 30, 2018 (Gephardt Daily) — A 21-year-old man has been arrested after police said he admitted to abusing a 4-year-old girl on more than one occasion in South Ogden.

The probable cause statement said authorities responded to a home in South Ogden Sunday.

Officials stated the residents of the home, a man and woman, said Nelson came to their home that same day at approximately 5 p.m. to visit and have dinner.

The man said that after Nelson left, their 4-year-old daughter told them that Nelson touched her inappropriately while he was helping her change her clothing to get into pajamas.

This occurred in the basement of the house in the child’s bedroom, the PC statement said.

The man then said he called Nelson and asked him to return to the house, which he did, the statement said.

Nelson was read his Miranda rights and agreed to talk to officers. The PC statement said that Nelson then admitted to touching the girl inappropriately while he was helping her get changed.

While speaking to investigators Nelson admitted approximately one year prior he also touched the girl inappropriately while at the same house in South Ogden City. 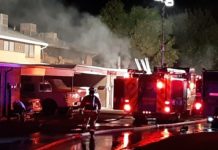