VERNAL, Utah, June 29, 2020 (Gephardt Daily) — A man has been charged with felony DUI after he struck a power pole and a building while driving in Vernal Sunday.

A probable cause statement from the 8th District Court of Uintah County said Ty James Nez, 45, is facing charges of:

On Sunday just after 4:15 p.m., Vernal City police were dispatched to an injury traffic accident at 716 East Main St. It was reported that a vehicle had crashed into a building.

“I arrived at the accident location and observed a maroon pickup truck was partially crashed into a vacated building which resulted in extreme damage to the vehicle and building,” the arresting officer wrote. “Witnesses and motorists that had stopped at the accident told me that the driver had climbed out of the truck, crossed the roadway and was at the Gateway Lounge across the street. They stated that he was bleeding and trying to leave because he said he had a warrant.”

The officer went across the street and found Nez in a parking lot, bleeding from the head, the statement said.

“He stated that he didn’t know what happened, that his tire had just came off and caused him to crash,” the statement said. “He said that people had been stalking him and loosened his lug nuts.”

The suspect had an odor of alcohol coming from his person, the arresting officer said, but on scene denied consuming any alcohol. He was transported by Gold Cross Ambulance to Ashley Regional Medical Center in Vernal for medical treatment.

“Investigation into the accident it appears that the driver of the vehicle left the roadway on the right side going onto the curb, sidewalk and frontage to a vacant building,” the statement said. “The vehicle struck a power pole street light which appears to have sheared off the driver’s side tire and suspension projecting it out into the roadway eastbound.”

The vehicle then continued eastbound on the sidewalk portion grazing flower planters and striking the northwest corner of the building.

“I followed the ambulance to the hospital and met with subject,” the arresting officer wrote. “I overheard medical staff asking him if he had been drinking to which he stated that he had been. When asked he told me he had drunk just one beer. I noted a very strong odor of alcohol on his breath while in the enclosed room that I wasn’t able to detect as much in the open air at the scene.”

Blood was drawn by Ashley Regional Medical Center and booked into evidence to be submitted to toxicology for analysis.

Nez has two prior DUI convictions within the previous 10 years of this incident.

The suspect was transported to Uintah County Jail, where he is being held without bail. 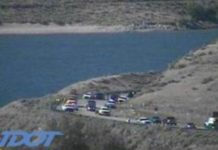