According to Unified Fire Authority spokesperson Dave Ulibarri, the incident happened at the Flight Park State Recreation Area in Draper.

The victim, a man in his 50s, suffered critical injuries in the fall.

Life Flight was unable to assist due to traffic-control issues, so the man was taken by ground ambulance to Intermountain Medical Center in Murray.

On Sunday, Ulibarri said, “As far as we have been told, the man is still in critical condition.”

The man’s identity has not yet been released. 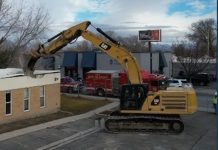