On Monday, Massey was sentenced to 11 years to life in prison, according to a statement released by Salt Lake County District Attorney Sim Gill.

In Monday’s statement, Gill said, “I want to thank the prosecuting attorneys and law enforcement officials who helped bring this matter to justice. We offer continued condolences to Unified Police Department and Officer Reyes for the loss of their beloved colleague Dingo.”

Massey, a parole fugitive who was known to be armed and dangerous, had been the subject of a weeks-long search by law enforcement when he was spotted in the Salt Lake area by members of VFAS (Violent Fugitive Apprehension Section), composed of U.S. Marshals and other agencies, including the Unified Police Department.

A traffic stop was initiated, but Massey fled and, although his tires were spiked, he managed to drive to a parking lot near 3300 South and 1100 East, where he then left the vehicle.

As Massey fled on foot, officials said, Dingo was deployed out of the pre-positioned police vehicle and pursued him. When Dingo “attached” to Massey, Massey pulled a firearm and shot the dog multiple times. The dog was rushed to a local veterinary office, where he was pronounced dead. 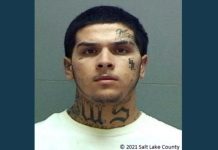