LAMB’S CANYON, Utah, June 28, 2021 (Gephardt Daily) — A man was flown to hospital in critical condition after a crash on Interstate 80 near Lamb’s Canyon Monday morning.

“At 6:29 a.m., a Honda Accord was traveling eastbound I-80 at approximately mile marker 136,” said a statement from Utah Highway Patrol. “For an unknown reason, the Accord left the road to the left and drove in the brush for approximately 100 yards before it became airborne because of man-made water run-off.”

The Accord struck the side of the mountain where it rolled onto its roof and came to a rest in the bottom of the run-off. There was no water running at that time.

“After the vehicle came to a rest, an adult male in his early 40s was trapped inside until emergency medical personnel was able to extricate him,” the statement said. “Life Flight responded and flew him to a nearby hospital in critical condition.”

The man has not been identified, officials said.

“In addition, the Accord is reported as stolen out of West Jordan and their department has been notified,” the statement said.

The left lane was shut down, but reopened at approximately 10 a.m. 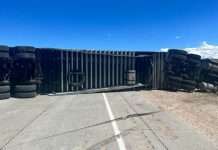