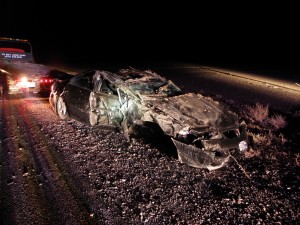 The driver of the Pontiac Bonneville was unrestrained and ejected as the vehicle rolled. The semi truck was on the right shoulder and out of the way of traffic. He was waiting for a maintenance vehicle, it also had its triangles out.

The sedan impacted the rear trailer, at the rear axles in a side swipe manner. The vehicle continued off the road and to the right, rolling several times and ejecting one 45-year-old male.

The Utah Highway Patrol is still investigating the cause of the accident and trying to figure out whether durgs or alcohol contributed to the crash.