Just after 9:30 a.m., the man was skiing with his son in the White Snake area by the Snake Creek run, Unified Police Department Sgt. Melody Cutler told Gephardt Daily.

The resort is making snow in that area, Cutler said.

“The son says the fake snow covered his goggles so couldn’t see, so he is assuming the same thing happened to his dad,” Cutler said.

The ski patrol worked on the man for around 70 minutes and were then able to get him up the hill and onto LifeFlight, where he was transported to the University of Utah Hospital.

Brighton Ski Resort issued the following statement: “On Wednesday. Nov 24. at around 9:30 a.m. a male skier was reported laying in the snow unconscious. Brighton Resort ski patrol responded to the call and immediately started performing medical treatment and continued until Life Flight was able to take over and air lift him to the hospital.” 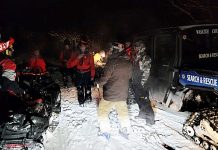