A probable cause statement from the 6th District Court of Panguitch said Tyler Wayne Adams, 24, is facing 15 counts of enticing a minor, a second-degree felony.

The statement said that on or around Jan. 12, the arresting officer created a fake Facebook profile of a 15-year-old female to investigate potential sex crimes and narcotic distribution.

“On Jan. 13, an individual using a Facebook name of Tyler Cormier-Taber, later identified to be Tyler Adams, added my fake profile and began messaging who he believed to be a 15-year-old female,” the statement said. “Adams asked the age and I responded I was 15 years old. Adams sent his phone number and insisted I text him.”

The officer then texted “continuously” daily with Adams, with the suspect thinking he was texting a 15-year-old girl.

“Adams has sent very sexual text messages explaining in detail the sexual things he would like to do to the 15-year-old female,” the statement said. “Adams has sent multiple sexual pictures.”

After the undercover officer posing as the girl said to Adams that “she” had two sisters, aged 9 and 12, Adams allegedly began including them into his sexual text messages, explaining what he would like to do to them. Adams also allegedly requested sexual pictures “multiple times” from who he thought was the 15-year-old girl, and explained in detail “how to take nude selfies,” the statement said.

Adams stated at one point that he was in a halfway house and had done federal prison time for child pornography.

Adams’ offender report confirmed he has served federal prison time and is in a halfway house.

He was arrested Friday and is being held without bail. 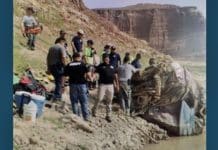