Logan Police have identified the man as Luis A. Vital, from Wendell, Idaho.

The crash occurred at about 4 p.m., less than a mile from Logan Regional Hospital.

A westbound Mini Cooper, driven by an 18-year-old woman, was waiting to turn south onto 200 East.

“It appears the light turned yellow, and they both assumed they could make it through the intersection,” Jensen said.

The Traverse slammed into the Mini Cooper.

Jensen had no information regarding specific injuries, but said two of the children were transferred to hospitals in the Salt Lake City area, and the 2-year-old was in very serious condition. Jensen said he believes the wife’s injuries were not life-threatening.

The woman in the Mini Cooper was treated at the hospital for minor injuries.

Jensen said the accident — which he called a “terrible tragedy” — is still under investigation. 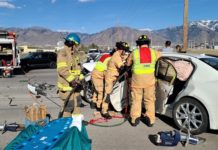