Allen was in Utah to compete at the Utah State Fair, and had arranged to stay at the apartment of a former girlfriend, LaShawn Bagley, who has been charged with Allen’s murder.

Allen, a Texas native, was ranked 157th in the world in 2022, according to the Professional Bull Riders web page for Ouncie Mitchell.

We are shocked and saddened to learn of the passing last night of Demetrius Allen, who fans best knew as Ouncie Mitchell, in Salt Lake City. Ouncie was a talented cowboy and a familiar face on the Velocity Tour. He also competed — and won — in the Bill Pickett Invitational Rodeo, whose president Valeria Howard-Cunningham shares our grief.

Ouncie got his name because he was born small. He grew up to compete with a huge heart. The PBR organization sincerely extends our own heartfelt condolences to Ouncie’s cousin Ezekiel Mitchell and the entire Mitchell family.

Suspected shooter LaShawn Denise Bagley, 21, was booked into jail at 9:50 a.m. Monday on suspicion of:

Salt Lake City Police responded after a 12:06 a.m. Monday call to dispatch regarding a shooting. Upon arriving at 965 S. 200 West, in the Ballpark neighborhood of Salt Lake City, officers found a man, later identified as Allen, with a gunshot wound to his torso in the parking lot outside an apartment.

Officers observed several bullet impacts/strikes to exterior windows/doors of the apartment, with shots appearing to have come from inside the apartment, the statement says.

“The male victim was transported to IMC Hospital where he was later pronounced deceased.”

Bagley, the apartment resident, had been allowing the victim to stay with her “while he was in town for the rodeo at the State Fair grounds,” the probable cause statement says. “The A/P (arrested person) and the victim have been previously involved in an on-and-off romantic relationship together.”

According to the statement, Bagley, Allen, and a witness traveled to the State Fair and afterward went together to a bar in the downtown area.

While outside the bar, the statement continues, a verbal altercation took place between Allen and Bagley. Bagley then left in her vehicle, and Allen and the witness got a ride back to Bagley’s apartment to retrieve Allen’s property, which was inside the apartment.

“Before arriving at the apartment, the victim attempted phone calls and text messages to alert the suspect that he was coming over to retrieve his property,” the police statement says.

When Allen arrived at the apartment, he knocked on the door and stated he was there to retrieve his property, charging documents say.

Bagley then “fired several rounds through the glass door with at least one round striking the victim in the torso where he fell to the ground.”

Arriving officers saw Allen outside the apartment’s exterior door, unable to move, and “developed a plan to move the victim away from the exterior apartment door in order to safely render aid,” the statement says. No observable blood evidence was found inside the apartment unit.

Bagley had a strong odor of alcohol on her breath when taken into custody, the statement says. Post Miranda, she declined to be interviewed by police.

Bagley has lived in Utah, Texas and Michigan in the past year, and officials believe she is a possible flight risk. A judge ordered that Bagley be held without bail. 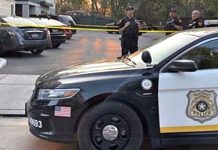 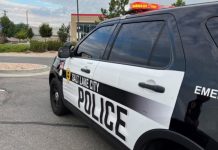 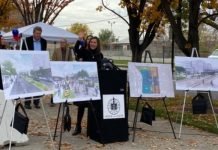