According to West Valley City Police, the crash happened at 8 a.m. when a man in his late 30s suffered an unknown medical situation and drove into the Subway located at 4100 South 4000 West.

No one inside the building was hurt and the man was evaluated at the scene before being transported to the hospital in good condition.

Building inspectors have closed the Subway to the public until further notice. 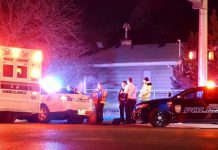