The play tells the story of Lark Timon, who is no stranger to failure as it looms large in her filmmaking career. Plagued by debt and professional disappointment, she chances upon a potentially career-changing opportunity only to be confronted by questions about her art, her family, and her identity as a queer mestiza.

We spoke to Larson, who is the author of plays including “The Edible Complex,” “The Post Office,” “Pilot Program” and “Sweetheart Come,” as well as adaptations of Jane Austen’s “Persuasion” and “Pride and Prejudice.”

She also wrote the screenplay for films, including “Jane and Emma” and “Freetown,” winner of the Ghana Movie Award for Best Screenplay and the Utah Film Award for Best Picture.

She is the youngest writer ever to be presented with the Smith-Pettit Foundation Award for Outstanding Contribution to Mormon Letters, which she received for her body of work in 2019. She is the only woman to receive more than one Association for Mormon Letters Drama Award, and is one of only two playwrights to win four.

Larson said this latest show is very personal. “I don’t know that I’d go so far as to say it’s autobiographical, but there’s definitely some elements in it that are, and it’s one of those things that I’ve thought about all of my life, because my heritage is a big part of who I am,” she said.

“My Mom is from the Philippines, and my Dad is from Vegas, from southern Utah, but he went to high school in Vegas, so it’s part of who I am and what my family is, and who my family is, and I guess I just never really thought about representation for myself in the way that I think about it when we talk about race.

“It’s like I’ve always kind of felt in between things, and it’s like, am I Asian enough to say, oh hey, I’m Asian, I deserve representation, when people look at me and they don’t know that I’m Asian unless I tell them? So I think this has been percolating for a really long time, and I guess it’s coming out now because Jerry and Plan-B are so supportive of this kind of thing, and I had a conversation with Jerry the summer of 2020 at the beginning of the pandemic, that kind of I had a situation, and Jerry says, well you should write about it, and then that became eventually this play.”

Larson said she wrote the script, then there was a reading in the Plan-B Lab, of which she is a member. She explained that several playwrights from the Salt Lake area get together once a month and read each other’s work and respond to it. She also did numerous readings with friends via Zoom.

We also asked her if this play was particularly hard to let go into the world, given its personal nature.

“I would say they’re all pretty hard to let go,” she said. “I am nervous about this one from the personal aspect. I am a little nervous to see… because you’re always putting a little bit of your soul in your work, and you don’t know how people are going to react to that and, in this case, it’s a bigger piece than usual. So I am nervous, but I trust Jerry implicitly as an artist and as a person of color, and I feel like we have a really great cast, so I’m excited to see how it goes, and I hope people will just be open to the story we’re trying to tell.”

Larson said the pandemic was a busy time for her. “I did get a lot of work done,” she said. “It was hard, because I did have shows that were supposed to happen that didn’t happen, like there was a lot of theater… theater kind of grinded to a stop, which was really hard to both see and to experience. It was a difficult time… I love to go and see other people’s work and to experience theater, and that influences me as an artist, and so I missed going, but I am a homebody in a lot of ways, that I am not necessarily a super social person, so it wasn’t hard for me to go oh, I need to go home and write, and if you go home and write because you can’t do anything else, you may as well take advantage of that. So I was actually very productive, I tried to be very productive.”

She said during the pandemic that, as well as writing “Mestiza, or Mixed,” she wrote a comedy that also was read in the Plan-B Lab.

“I wrote at least two full-length plays. I did a short radio play for Plan-B, and a couple of other things I got started, so I did try and use the time because we had it,” she said.

Larson said that part of the way she fights writers’ block is to have at least one project on the go at any time.

“I feel like if you’re writing something really intensely, and you get stuck, and you do get stuck, the worst thing you can do is stop writing and say, oh I have a block,” she said.

“For me the best thing I can do is work on something else and hope it shakes something loose, and I can come back to the thing that’s stuck.”

She said her advice for fledgling playwrights is to write “all the time.”

She added: “And listen to people. I think a really big important part of playwriting is voice, you have to listen to how people talk and how they communicate, ‘cos you’re trying to translate that to the stage, so you want it to feel natural and real, but you also have to get used to compressing things down, so it’s almost exactly how people talk.”

We also asked Larson what two playwrights she would most like to have dinner with.

“My personal favorite playwright, who I admire very much, is a British playwright. Her name is Helen Edmundson, and she is known for her — she’s done a couple of great adaptations of classics, she has a really powerful version of James Elliot’s ‘The Mill on the Floss,’ which I saw on study abroad, X number of years ago, and it really changed my life in a lot of way, I was a very new playwright at the time,” she said.

“I had studied to be a novelist, and I had just switched over to playwriting, and seeing that play, [it] was a very physical, vulnerable show, and it was really the first time I understood as an audience member what theatricality was and how theater is different as a medium than film and then novels, and I feel that in a lot of her work, she’s a very prolific playwright in the U.K.”

Larson also said she is a big fan of American playwright Adrienne Kennedy.

“I love her plays. I feel like they’re very visceral and poetic and very relatable in that she says very important things,” she said.

Larson said that she is hoping her next step will be to have the comedy she is writing, called “Gin Mummy,” which is a love letter to Oscar Wilde, still to be produced.

She added: “I’m working on another play about a Filipino character. It’s dealing with an art forgery scandal. So I’m hoping something cool will happen with that, and in it’s very, very, very early stages, we’re going to have a reading of that in the Plan-B Lab in the next few weeks. So it’s at the very beginning of the process.”

She added about the show “Mestiza, or Mixed,”: “I am really excited for people to see it and I hope they will come and see it and support Plan-B, who is one of the only theaters in the country that supports local work by local writers.” 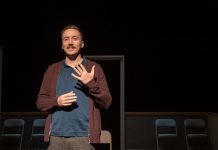 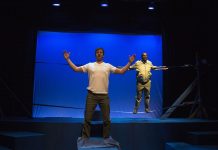 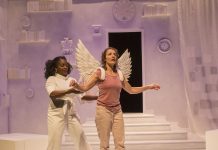