SALT LAKE CITY, Utah, Feb. 10, 2019 (Gephardt Daily) — Folks in downtown Salt Lake City had an eye-opening experience Sunday as military helicopters hovered over Main Street throughout much of the afternoon.

According to a press release from the Utah National Guard, the helicopters were preparing to take part in a nationally coordinated training mission known as Exercise Desert ICE – a “multi-service and multinational training event designed to fortify the country’s security against chemical, biological, radiological and nuclear threats.”

A total of 3 helicopters took part in the rare urban training mission, including two UH-60 Black Hawk choppers, most often used in ground attacks, air assaults, troop transports and medical evacuations. A single UH-72 Lakota helicopter also joined in the exercise. The UH-72 is most often deployed stateside where it’s used by the National Guard units for homeland security and disaster response missions.

The choppers took turns landing on helipads located on the roof of the Wells Fargo Center at 299 S. Main Street. The helipads were closed to both the public and media during the exercise.

The Utah National Guard statement said the aircraft will be conducting multiple passes and landings until about 5 p.m.

The full-blown Desert ICE operation is scheduled for April 10, 2019 and will take place in collaboration with Canada, Australia and United Kingdom, according to the National Guard press release. 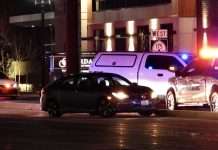