KAMAS, Utah, Sept. 30, 2018 (Gephardt Daily) — Mirror Lake Highway was closed Sunday morning after the Murdock Fire east of Kamas made a “run to the north.”

The wildfire, one of two in the Mirror Lake Complex area, has forced the closure of the highway, also known as State Route 150. The closure is from Murdock Basin Turnoff (mile marker 22) to Ruth Lake Campground (mile marker 38) for public and firefighter safety, Utah Fire Info said in a tweet. Drivers are being urged to avoid the closed stretch of highway.

A tweet from Utah Fire Info Saturday night said: “The Murdock Fire made a run to the north, producing a large smoke column visible from Evanston, Wyoming. It is now a half mile from Blythe Lake, located in the High Uintas Wilderness.”

The Mirror Lake Complex Fires also include the Slate Fire, which is burning in the same area as the Murdock Fire. As of Sunday morning, these two fires have burned 5,137 acres and are 17 percent contained.

“With growth taking place on the Murdock Fire, and the improving containment of the Slate fire, the Mirror Complex is now 17 percent contained, up two percent from Friday,” according to the Inciweb website.

The update said the Murdock Fire is growing primarily to the northeast as southwest winds push it north and east through the steep drainages of Murdock Basin, the update said. This area has 90 percent dead and down trees, which firefighters cannot work directly in. It is not threatening structures or infrastructure as it moves deeper into the High Uintas Wilderness. Approximately two miles north of the fire is Mirror Lake; the campground and area is currently closed.

The Mirror Lake Complex Fires are thought to have been caused by lightning. The expected containment date is Oct. 30. 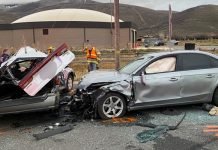