Romney posted the statement to his Twitter account Saturday after major news outlets and election observers across the U.S. determined Biden’s lead was insurmountable in the battleground state of Pennsylvania.

Trump’s projected loss in the hotly contested commonwealth gives the state’s 20 electoral votes to the Democratic ticket putting the Biden-Harris above the necessary 270 needed to win.

We know both of them as people of good will and admirable character.

We pray that God may bless them in the days and years ahead.

Friday, Romney, and Sen. Mike Lee both addressed the controversial vote count which Trump maintains is rife with fraud.

“The President is within his rights to request recounts, to call for investigation of alleged voting irregularities where evidence exists, and to exhaust all legal remedies — doing these things is consistent with our election process,” Romney’s tweet says.

“He is wrong to say that the election was rigged, corrupt and stolen,” Romney’s message continues, “doing so damages the cause of freedom here and around the world, weakens the institutions that lie at the foundation of the Republic, and recklessly inflames destructive and dangerous passions.”

Sen. Mike Lee Trump did not specifically comment on Trump’s assertions that the election process was rigged. In a brief statement posted on social media Lee wrote, “Americans deserve a free and fair election. While vote counters must be allowed to do their jobs the American people also need a transparent process so they can trust the final count.” 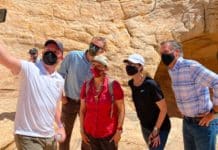