Romney, who ran against former President Barack Obama in the 2012 presidential election, failed to gather the 60 percent of votes from delegates at the Utah Republican Convention necessary to clinch an outright nomination to replace retiring seven-term Sen. Orrin Hatch.

Romney was the only candidate to seek signatures to ensure a spot on the primary ballot — collecting more than 28,000 — and suggested the decision resulted in him losing votes from certain delegates.

“I know there were many people who were not enthusiastic about someone gathering signatures,” Romney said.

Despite the outcome, Romney said he was glad he gathered the signatures, adding it “was right for me.”

Romney’s bid for the seat was endorsed by both Hatch and President Donald Trump and he managed to raise $1.68 million for the campaign versus Kennedy’s $289,000.

Kennedy alluded to the biblical story of David and Goliath, handing out “stress stones” to the delegates as a promise that he would be the candidate to slay the giant of the political establishment in Washington, D.C.

“I’m tired,” Kennedy said. “You know what I’m really tired of? I’m tired of business as usual in Washington, D.C. If you want things to change, you need to vote for change.”

Romney dismissed the analogy, saying he has established political stances.

“None of us is David. David was anointed of God. And secondly, I’m not Goliath. Washington, D.C., is the Goliath,” Romney said. 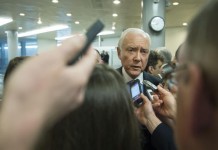 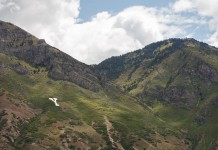