Heavy rainfall was reported in several areas of northern Utah on Saturday afternoon, leading to a flash-flood advisory for Salt Lake, Davis and Tooele counties.

Drier conditions are expected Sunday and Monday, with temperatures at or below normal, according to the National Weather Service in Salt Lake City. However, “monsoonal moisture is expected to return to the area for the middle to latter part of the week,” the NWS forecast states.

Saturday’s storm dropped nearly 2 inches of rain (1.89) in Tremonton in Box Elder County, and nearly an inch in South Salt Lake (0.95) and Salt Lake City (0.88), according to NWS precipitation totals. 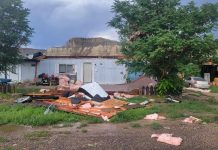