“Police didn’t think Lauren was in danger when she reported to them because she was stoic,” Jill McCluskey tweeted Wednesday night.

“Police didn’t think #GabbyPetito was in danger because she was crying & her abuser said she was crazy. They were both murdered. We must do better.”

Lauren died in 2018, at age 21, after being shot by her former boyfriend. Prior to that, she had told U of U police she believed he intended to harm her.

Gabby, 22, died by homicide within a week or two after a witness called Moab police to say he had seen her being slapped by a man, later determined to be boyfriend/traveling companion Brian Laundrie.

Both Petito and Laundrie downplayed the Moab incident to officers, although she was crying while police interviewed her.

On Sept. 1, Laundrie returned home to Florida driving Petito’s van, but she was absent. Her body was located last weekend in the Wyoming area where the couple had been camping.

Laundrie has been missing since early last week, and a manhunt for him continues. 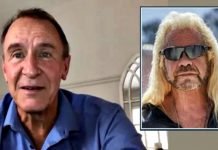