CENTERVILLE, Utah, April 24, 2019 (Gephardt Daily) — A motorcyclist was seriously injured after he lost control during rush hour in Centerville on Wednesday evening.

The male, whose name has not been released, was riding east of Interstate 15, near the intersection of Market Place Drive and Parrish Lane, when he lost control of his motorcycle, a tweet from the Centerville Police Department says.

“He was not wearing a helmet,” says a tweet issued at about 6 p.m. “(He) Was taken by ambulance to IMC.” 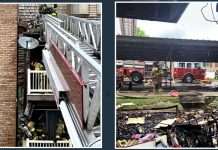