PANGUITCH, Utah, Aug. 9, 2019 (Gephardt Daily) — A motorcyclist was killed in a head-on collision in Panguitch.

Utah Highway Patrol troopers were dispatched to the scene, on State Route 143, at 5:55 p.m. Thursday.

“The rider of the motorcycle, Kevin S. Barnhust, age 68, of Panguitch, was killed on impact. Drowsy driving is being investigated as a possible cause. Follow-up investigation is ongoing.” 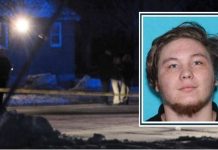