MURRAY, Utah, Feb. 12, 2021 (Gephardt Daily) — Police in Murray are looking for a man suspected of stealing a vehicle with two children in it Friday afternoon.

The incident occurred at 2:30 p.m. in the parking lot of the Comfort Inn, 5300 S. College Drive, while the children’s parents were inside the hotel and the children, both younger than 10, were waiting in the backseat of the vehicle, said Officer Gruendell, with the Murray Police Department.

The vehicle and the children were recovered about an hour later in the parking lot of an apartment complex.

“The kids are fine, but we’re still trying to locate the suspect,” Gruendell told Gephardt Daily.

The suspect is described as a Caucasian male, who was wearing an orange hat and a long-sleeved T-shirt with an orange body and black sleeves at the time of the theft.

Anyone who has any information about this incident, or who observed anything that may help with the investigation, is asked to call Murray Police at 801-840- 4000. 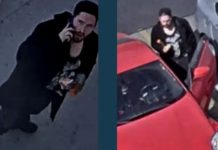